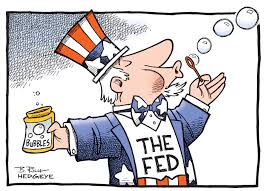 About a year ago we described how modern financial systems have grown dependent on central bank balance sheets, and why another round of easing from the US Federal Reserve — a "QE4" — was vital for markets. Fed chair Jay Powell has so far proved sufficiently flexible to reverse the balance sheet shrinkage, to which his immediate two predecessors, Ben Bernanke and Janet Yellen, had been committed.

The "Fed Listens", as the name of its tour of US cities suggests and, true to form, recent worries in the repo market spurred the central bank to inject a further $400bn into the financial sector. It increased its balance sheet by about 10 per cent between last September and the year end.

Yet, the Fed's spin-doctors are trying to persuade us that this is not quantitative easing. Certainly, it has not involved direct buying of US Treasury notes and bonds, but it has still led to a sizeable uptake of short-term Treasury bills.