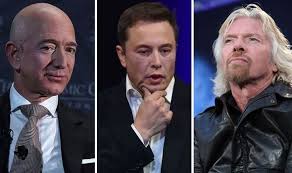 But also happening in 2020—if all systems are go—will be the beginning of regular U.S. space tourism flights, either by Richard Branson's Virgin Galactic (ticker: SPCE) or Jeff Bezos' Blue Origin or both. Also possibly coming this year are tourist trips to the International Space Station (ISS) on a craft built by Elon Musk's SpaceX. (Boeing has a spaceship too, but that company might be otherwise occupied.)

So apologies to Donald, the International Olympic Committee (IOC) and Ludwig van, but commercial space travel could end up being the biggest damn thing to happen this year. In fact, I think it's the beginning of a real game-changer for humanity.

If you've been following the space biz, you know that the 'go year' has been pushed back a number of times, but Ann Kim, aerospace banker and managing director of Silicon Valley Bank, is feeling it. "These companies are close. They wanted to get humans into space in 2019, but were not as successful in delivering promises as originally thought. 2020 is a good year to see that inflection point."

It has been a long time coming. In fact these three companies are more or less of the same vintage. Bezos founded Blue Origin (named after Earth, the blue planet, as the place of origin), in 2000. SpaceX, which has colonizing Mars as its ultimate mission, was founded in 2002. And Branson started Virgin Galactic two years after that.