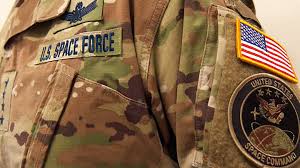 "The first #SpaceForce utility uniform nametapes have touched down in the Pentagon," the service branch tweeted from its official account, attaching a photo of the uniforms.

The uniforms were welcomed with praise by some, including the official Twitter account for the U.S. Navy, which called the clothing "out of this world" in a tweet.

"What are the coordinates? Let's trade," the military branch added.

However, some social media users seized on the opportunity to mock the uniforms, asking questions such as "Why do we need camo in space?"

The USSF responded to some of the criticism in a tweet later Saturday morning, explaining that the branch had been utilizing uniforms from other military branches to prevent unnecessary costs.

"USSF is utilizing current Army/Air Force uniforms, saving costs of designing/producing a new one," it wrote, adding, "Members will look like their joint counterparts they'll be working with, on the ground."