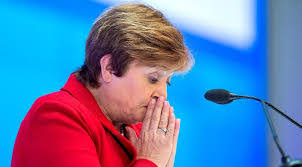 The new head of the IMF, who took over from Christine Lagarde in November, warned that the global economy could soon find itself mired in a great depression.

During a speech at the Peterson Institute, IMF Chairwoman Kristalina Georgieva compared the contemporary global to the "roaring 20s" of the 20th century, a decade of cultural and financial excess that culminated in the great market crash of 1929.

According to the Guardian, this research suggests that a similar trend is already under way, and though the collapse might not be around the corner, when it comes, it will be impossible to avoid.

While the inequality gap between countries has closed over the last two decades, the gap within most developed countries has widened, leaving millions more vulnerable to a global downturn than they otherwise would have been.

In particular, she singled out the UK for criticism: "In the UK, for example, the top 10% now control nearly as much wealth as the bottom 50%. This situation is mirrored across much of the OECD (Organisation for Economic Co-operation and Development), where income and wealth inequality have reached, or are near, record highs."