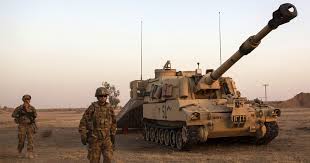 At Counterpunch, Michael Hudson has penned an important article that outlines the important connections between US foreign policy, oil, and the US dollar.

In short, US foreign policy is geared very much toward controlling oil resources as part of a larger strategy to prop up the US dollar. Hudson writes:

The assassination was intended to escalate America's presence in Iraq to keep control of the region's oil reserves, and to back Saudi Arabia's Wahabi troops (Isis, Al Quaeda in Iraq, Al Nusra and other divisions of what are actually America's foreign legion) to support U.S. control of Near Eastern oil as a buttress of the U.S. dollar. That remains the key to understanding this policy, and why it is in the process of escalating, not dying down.

The actual context for the neocon's action was the balance of payments, and the role of oil and energy as a long-term lever of American diplomacy.

Basically, the US's propensity for driving up massive budget deficits has created a need for immense amounts of deficit spending. This can be handled through selling lots of government debt, or through monetizing the debt. But what if there isn't enough global demand for US debt? That would mean the US would have to pay more interest on its debt. Or, the US could monetize the debt through the central bank. But that might cause the value of the dollar to crash. So, the US regime realized that it must find ways to prevent the glut of dollars and debt from actually destroying the value of the dollar.

This piss poor analysis of an article regarding the ongoing geopolitics of the petrodollar and the middle east is the reason why Zerohedge has a comments section to drive viewers to the site.  My two cents....copy pasta comment that I posted eariler...

In 1973 the dark lord Henry Kissinger forged a new ring of 'monetary power'... the ring of petrodollar power in the oil fields of Saudi Arabia. One ' monetary ring' to rule them all after the gold backed dollar collapsed in 1971 because of the failed vietnam war.

Here is the tale of how BURGER BOY LOST PETRODOLLAR AND CREATED THE PETROYUAN!

The US UK Israel petrodollar system collapsed overnight with the US military having no credible response to having its base bombed. A credible response is for the US to have dealt death from the skies, destroying and severely deteriorating Iran's ballistic launch capabilities or at the least a strike on its major oil refineries. That did not happen. Why?

The US & UK airforce are outdated....in fact any conventional air force that relies on drones or stealth jets to deliver bomb payloads are outdated!

The purpose of an air-force is to bomb targets from the sky. Iranians have shown you can do it with ultra-cheap short  medium range ballistic missiles which are nothing more than crap aluminum tubes filled with propellant, a low cost cell phone GPS guidance system and a big payload. You can make millions for the cost of one stealth jet!

IRAN has all US, Israel and Saudi targets mapped and gave a demo of what they can do. By the time the shitty F35s start their engines on a runway of a worthless aircraft carrier, thousands of these missiles will be launched by Iran destroying all targets within minutes of declaration of TOTAL WAR!

THE PURPOSE OF STEALTH has been defeated. There is no deterrence against ballistic missiles which are faster then aircraft! So by the time the first wave of stupid burger planes reach IRAN, all BURGER bases in Saudi Arabia, Iraq, Israel and aircraft carriers will have been destroyed! Which means the USA cant protect anything without losing everything!

TOTAL WAR even with a weak power like Iran means TOTAL BALLISTIC MISSILE WAR in which case everybody's base gets destroyed and who ever pushes the button fastest gets to destroy the targets fastest and everything is over in less than an hour!  Since burgers dont have magic hollywood space lasers, just piece of **** F35s and outdated carriers....burgers cant defend anything!  Because everything is over in less than  10 to 50 minutes of declaration of WAR and burgers dont have any deterrence for TOTAL BALLISTIC MISSILE WARFARE, the burger bombers that do take off wont have a carrier or airbase to return to...so burgers lose everything!

Trump killed a rook (solemani) in the game of geopolitical chess (which the Persians invented) and the mullahs in Tehran checkmated the USA and Israel by making redundant the view that only very very expensive stealth jets can accurately deliver bombs with precision! No brainer right there...a plane requires life support, complex systems just to support the idiot who is flying it to the target...a missile requires no stealth technology, its fast, accurate and deadly with no deterrent! In one stroke the mullahs revealed that the entire US air-force is obsolete against TOTAL short/ medium range ballistic missile war!

We should have had ballistic missile carriers but we dont because greedy defense contractor boomers think they are the smartest defense planners when in fact they just loved to build planes instead of realizing short range ballistic GPS guided precision missiles can do the same thing! But not  much profit in that of course..

US air-force outdated = US ground troops outdated because they rely on US air-force for back up. So you have to withdraw = NO PETRODOLLAR.

NO PETRODOLLAR = US MILITARY HAS TO PAY FOR GAS IT BURNS = CANNOT PROJECT POWER WORLDWIDE WITHOUT PAYING FOR IT IN REAL GOODS AND SERVICES = LOSS OF BEING THE 'ONLY' SAFE HAVEN RESERVE CURRENCY.

As of today the US cannot defend its bases in Iraq, Israel or Saudi Arabia.... US/UK/Israel/Saudis combined cannot protect anything without losing everything!

That is called check-mate my friends. The petrodollar age has ended and the AGE OF THE PETROYUAN has begun. China copies everything the US does, they wanted their Saudi Arabia and they got all of IRAN and IRAQ and now they will project power paying for the oil with yuan they print just for that purpose alone. You can never buy Chinese t bills or bonds because  Emperor Xi won't let you and will only lend on his terms.

Now Trump has to sign trade deal after trade deal because the world holds a massive amount of US securities and we have to supply real goods and services...opening up oil fields for export, everything. Burgers have to become a land of farmers and oil workers to satisfy all the US dollar holdings out there because TRUMP LOST THE PETRODOLLAR by DESTROYING US CREDIBLE MILITARY DETERRENCE for the whole world to see...the ability to provide 'SEGURIDY' AS HENRY KISSINGER would say.

Everybody now knows the US is just another power only burgers have their head up their asses. A big crash is coming our way and this time we DO NOT HAVE THE PETRODOLLAR FOR RECOVERY LIKE WE HAD IN 2008!

THE PETRODOLLAR AGE OF PROSPERITY HAS ENDED!  BECAUSE DRUMPF, KUSHNER AND NETANYAHU!

The EVANGELICAL BIBLICAL APOCALYPSE has come and gone! The 'biblical revelation' of our times is the revelation that the GREAT SATAN as the mullahs would call them have no power to price oil in the middle east anymore! The military humiliation and withdrawal comes next...its a Greek tragedy in modern times...

That is true and accurate in the case of burgerland and its rulers!