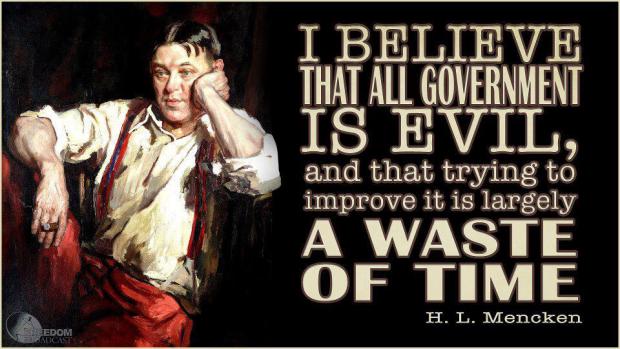 To be GOVERNED is to be at every operation, at every transaction noted, registered, counted, taxed, stamped, measured, numbered, assessed, licensed, authorized, admonished, prevented, forbidden, reformed, corrected, punished. It is, under pretext of public utility, and in the name of the general interest, to be placed under contribution, drilled, fleeced, exploited, monopolized, extorted from, squeezed, hoaxed, robbed; then, at the slightest resistance, the first word of complaint, to be repressed, fined, vilified, harassed, hunted down, abused, clubbed, disarmed, bound, choked, imprisoned, judged, condemned, shot, deported, sacrificed, sold, betrayed; and to crown all, mocked, ridiculed, derided, outraged, dishonored. That is government; that is its justice; that is its morality."
General Idea of the Revolution in the Nineteenth Century, translated by John Beverly Robinson (London: Freedom Press, 1923), pp. 293-294."
~ Pierre-Joseph Proudhon

The weak-minded cattle called the general population accept government as their god, observe all of its bogus laws, support its worldwide murders, use it to steal from their neighbors, worship its hired killers even while in so-called religious houses on Sunday, vote in fraudulent elections meant to give power to those who rule over them, and call these elected criminals representatives while ignoring their nefarious deeds; never taking responsibility for the evil they commit in the name of that same population. This is today's America, and this is the result of a national religion that worships the State.

There is no such thing as "representative government," and there never has been such a system. That is a myth, and that myth was planted into the psyche of the common man long ago. The fantasy of representative government has been accepted and embraced by the sheep since the beginning, and voting has been the shameful tool used to fool the people into believing they have a say. Those that still cling to these ridiculous notions are seemingly lost in a vacuum of ignorance, and no longer attempt to break the chains of the slavery that binds them. Who among you has broken those chains, denounced the state, and has rebelled against the misplaced authority and tyranny that is now so obvious? Sadly, this is reserved for only the few that seek, accept, and embrace truth in this hostile environment.

Those of us that attempt to tell the truth, and to expose the lies of the state, strive to help free the masses from the servitude they accept without question. These mostly unaccepted and unappreciated attempts to help those who continually refuse to help themselves are frustrating, but are necessary in order to change this false worship. What is to be gained by attempting to convince those who act as subjects of the state, who continue to obey the state's mandates, who continue to support state terrorism and murder, and who continue to call for others to be imprisoned if they defy the state's fraudulent laws? When reason and logic have disappeared, when authority is voluntarily accepted, what incentive remains for those who want only the truth when they are faced with a populace that not only hides from the truth, but also shuns it at every level? The incentive is education so that freedom for all can be gained.