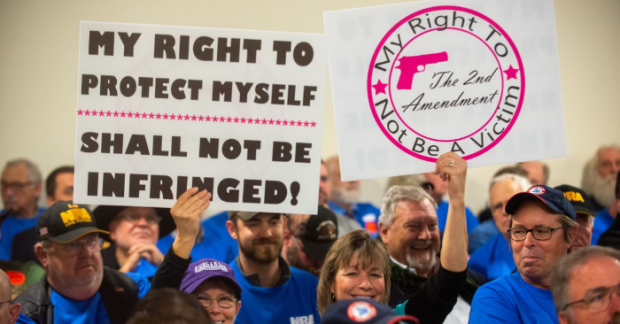 According to Ed Lynch, political analyst for WSLS in Roanoke, the huge turnout of protesters — many wearing circular stickers with the words "Guns Save Lives," could have a lasting impact on the gun debate in the Old Dominion — and an impact Democrats won't like.

"That's far more meaningful, far more far-reaching, and far more persuasive evidence that Virginians were certainly voting for change [in 2019] but they weren't necessarily voting for this sort of change," Lynch told the station.

As heartening as the pro-gun turnout in Richmond might have been, Spiker told The Free Beacon the bills that passed the judiciary committee and are on their way to the state Senate floor still represent a danger to Second Amendment rights, even after their modifications.

"While there were some improvements to some of these bills, overall, it's still bad legislation," he said. "Putting in more regulations and making it more onerous on the law-abiding citizens of Virginia is not something we stand for."

But it is something Virginia Democrats stand for — and the elections of 2019 gave them the power to actually implement it.

Gun rights supporters are going to keep up the fight, but it's going to be uphill until they can win at the ballot box again — starting with re-electing President Donald Trump in November.