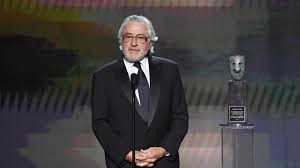 Leonardo DiCaprio, who first acted alongside De Niro in 1993's This Boy's Life, presented the statuette to the actor, noting that his performances have transformed audiences for almost 50 years. "His characters have echoed through our culture," said DiCaprio, referencing such films as Goodfellas, Casino, Raging Bull and The Godfather II.

Continuing his introduction, DiCaprio spoke of being influenced by De Niro because of his "fearless pursuit of authenticity." Calling him "elemental," DiCaprio added, "It feels as if he's always been here and always will be here."

He then shared a memory from his childhood, when his father took him to see Midnight Run in the theater. "As the lights went down, he turned to me and said, 'If you really want to be an actor and get into this profession, if you want to understand what great acting is, you watch that man on screen.'"