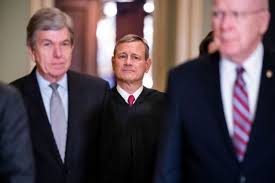 Roberts, who was officially sworn in for his role on Thursday, has offered no clues as to how he will approach the situation - which is particularly relevant in the event of a tie-breaking vote. Of note, some Republicans have argued that Roberts should not be able to break a tie on this issue.

Sen. Lisa Murkowski (R-Alaska) told The Hill she has received briefing materials from former senators who participated in the 1999 Clinton trial arguing Roberts should not be able to break a tie.

So far, she is still thinking about what his role should be.

"It's my understanding that if it's a tie, it fails," she said, summarizing the briefing paper.

Sen. Richard Shelby (R-Ala.) said it would be odd for the chief justice to decide procedural questions that have become very politicized in recent weeks.

"This is a Senate procedure," he said. "In a committee, if you have a tie vote you don't prevail. And that's what would happen here, I would think." -The Hill