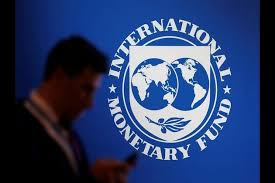 After the IMF cut its global economic outlook for 2019 to 2.9% in October, the lowest since the financial crisis, and warned that global trade growth would be "close to a standstill", moments ago the IMF once again downgraded its forecast for global GDP for 2020 and 2021, its sixth straight reduction, although in a sliver of optimism, global GDP in 2020 is now expected to post a modest rebound from 2.9% to 3.3%, (down from 3.4% in October) and to 3.4% in 2021 (down from 3.6%) as the IMF says "there are now tentative signs that global growth may be stabilizing, though at subdued levels."

According to the IMF, the downward revision primarily reflects negative surprises to economic activity in a few emerging market economies, most notably India, where 2020 GDP is now expected to rise just 5.8% down from 7.0%, which means that in 2020 China will regain the title of the world's fastest growing economy. In a few cases, this reassessment also reflects the impact of increased social unrest.

Emerging market debacle aside, the IMF said that on the positive side, market sentiment "has been boosted by tentative signs that manufacturing activity and global trade are bottoming out, a broad-based shift toward accommodative monetary policy, intermittent favorable news on US-China trade negotiations, and diminished fears of a no-deal Brexit, leading to some retreat from the risk-off environment that had set in at the time of the October WEO."