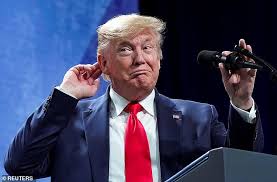 A Republican Senator says the Democrats are putting the spotlight on impeachment because 'their greatest fears are coming true,' that Trump will win in 2020.

Senator Tim Scott (R-SC) told Fox News: 'They're pretty concerned and I think they believe that the American people are now solidly behind President Donald Trump and their greatest fears are coming true.'

Scott's assertion on Sunday comes as the impeachment trial - only the third in American history - resumes on Tuesday.

'The most important statement made about this entire impeachment process was made by (Texas) Congressman Al Green when he said if we don't impeach him, he might win.' Sen. Scott added.

House Speaker Nancy Pelosi has previously said that whatever happens in the Senate Trump will 'be impeached forever.'