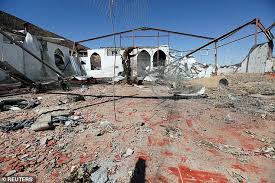 In one of the bloodiest assaults since the beginning of the civil war, ballistic missiles ripped through the holy building at a military training camp in the central province of Marib.

Officials from the Saudi-backed Yemeni military announced today the death toll had risen to 116 with more than 60 other men wounded, it is expected to rise further.

Yesterday a loud loud explosion was reported over the Saudi border city of Najran after another alleged Houthi missile was intercepted by Saudi air defences.

The Iran-backed rebels have carried out a recent spate of barrages on the Saudi-backed troops east of Houthi's stronghold at Sanaa, the largest city in Yemen.

Saudi Arabia's foreign ministry today said of Saturday's attack that 'such heinous, terrorist crimes deliberately undermine the path to a political solution' in the Yemeni conflict, according the kingdom's official news agency.

The assault 'reflects this terrorist militia's disregard for sacred places and... for Yemeni blood'.