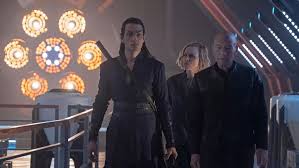 Jean-Luc Picard is in a dramatically different place in Star Trek: Picard. When we last left him on Star Trek: The Next Generation or the final TNG film, Star Trek: Nemesis, there was still hope and belief in the Federation. Two decades later, Picard, played with full-throated vim and vigor by Patrick Stewart, instead rants about its failings and why he resigned.

"The galaxy was mourning, burying its dead, and Starfleet slunk from its duties," Picard barks, a nod to the destruction of Romulus that sets off the chain of events from the J.J. Abrams-directed Star Trek film. He calls the Federation "downright criminal."

"I was not prepared to stand by and be a spectator," he said.

Surprising words from the former prototypical captain of the Federation, but it speaks both to the state of where Picard is, and the fact that the future isn't as rosy as it once was.

The scene is also the clearest statement to fans that Star Trek: Picard, which premieres Jan. 23, isn't just a rehash of TNG, which ended its run nearly 26 years ago. Like Star Trek: Discovery, the first Trek show to run on CBS All Access (disclosure: CNET and CBS All Access are both owned by ViacomCBS), Picard embraces the conflict and shades of gray embraced by contemporary television but that some fans may see as a departure from Gene Roddenberry's hopeful vision of the future.

Picard is the great leader we need now more than ever.

But some fans forget Star Trek has always reflected society. Picard likewise serves as a mirror, exploring real-life issues including artificial intelligence through the Borg and the rights of "synthetics," like Data, as a new species. Having Picard, the standard-bearer for the ideals of the Federation, question the longstanding institution comes at a politically turbulent time when many are rejecting the idea of blindly following authority.

"I'd say the leadership of both countries (the US and UK) is somewhat questionable," Stewart said in an interview earlier this month. "And that is the same situation we find Starfleet in -- and the Federation."

But Alex Kurtzman, co-creator and executive producer, argues Picard isn't a dark show. There's a lot to be hopeful about, he said, and it all goes back to the main man himself.

"In the face of such adversity and in the face of tremendous moral gray areas, he always seems to find the right thing to fight for," Kurtzman said in an interview.

Star Trek has tapped into the gray area of Starfleet and the Federation before, at times uncovering some isolated injustice to tell a morality tale (think later episodes of Deep Space Nine or Star Trek: Insurrection), but the idea of challenging the Federation's moral authority on a foundational level serves as a core theme of Picard.