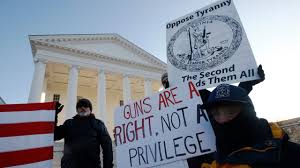 According to Twitter account VACapitol2020, 22,000 people attended Lobby Day, with approximately 6,000 people on Capitol Square and 16,000 outside the fences.

Despite concerns that white extremist militia groups planned to enact violence during the rally, leading Gov. Ralph Northam to issue a State of Emergency banning all weapons from the capitol grounds, the event itself went off without a hitch. Only one arrest occurred, with a 21-year-old woman charged with one felony count of wearing a mask in public.

"Today showed that when people disagree, they can do so peacefully," Gov. Northam said in a press release. "The issues before us evoke strong emotions, and progress is often difficult."

Jan. 20 is traditionally known as "Lobby Day" in Richmond, but with Northam and a Democratic majority set to roll out tighter gun-safety legislation, those in favor of gun rights turned out around the Virginia Capitol to press their case against it.