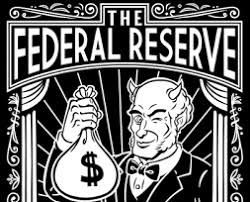 In last week's explanation of why the Federal Reserve is evil, I invoked the principle of calling things by their real names, a concept that drew an insightful commentary from longtime correspondent Chad D.:

Thank you, Charles, for calling out the Fed for their evil ways. We have to properly name things before we can properly address them. I would add that the Fed's endless creation of "money" to hand out to connected bankers (not all bankers) is just one facet of the evil. The evil also manifests itself as extraordinary political-economical power in a system that allows legalized bribery disguised as free speech.

One does not need money to speak/write to convey one's thoughts, but what money does allow is the drowning out of speech of those without money by those with a lot of money. In essence, the ultra-rich (i.e. the top .01%) get a huge megaphone to blare their thoughts, many of which are deliberately used to disorient and confuse the common man through the major media and so-called higher institutions of learning. Hence, we get common folk actively fighting for policies and laws that are against their own personal interests, such as promoting "free trade" agreements that are really managed trade agreements, whereby domestic workers are forced to complete with workers in other countries who make a pittance and are not protected by labor or environmental laws.

These agreements are part of a legal, yet unjust, framework that gives unfair, competitive advantages to large, multinational businesses at the expense of their smaller domestic and international competitors, which includes the abridgment of basic rights to settle disputes in a real court of law, not some kangaroo arbitration process with biased "judges".