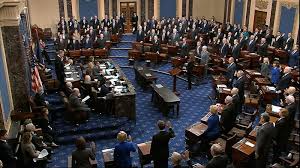 According to Senate rules, the trial session will begin at 1 pm in Washington, when Senate Sergeant-at-Arms Michael Stenger is expected to reprise his role from last week and bring the Senate to order.

According to a report on what to expect from the first day of proceedings from Fox News, the first order of business will be swearing in Senator Jim Inhofe, who wasn't present for Chief Justice John Roberts' mass swearing-in of the Senate "jurors".

Roberts will be present to preside over the proceedings. He will be accompanied on the dias by two women, Senate Parliamentarian Elizabeth MacDonough and Assistant Parliamentarian Leigh Hildebrand, who will likely be seen whispering in Roberts' ear and passing him messages as they help him oversee the trial.

After the opening formalities are finished, Senate Majority Leader Mitch McConnell will bring forward his resolution setting the rules for the trial.

McConnell's proposal is formally known as a "motion" in Senate parlance. According to the chamber's rules, Pelosi's seven appointed impeachment managers and Trump's defense team will each have two hours to debate McConnell's rules, which, as we noted above, include the compressed timeline and a 'kill switch' to end proceedings if Dems get out of line, as well as any amendments proposed by Democrats.