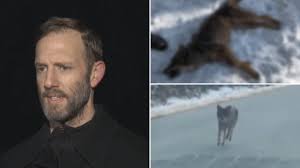 A father in New Hampshire has strangled a coyote to death with his bare hands after it grabbed his two-year-old son and pulled him to the ground.

Ian O'Reilly was walking a hiking trail in Exeter with his wife and three children on Monday around 11am when the animal got its teeth into the two-year-old's coat.

The boy's parents managed to separate him from the creature but O'Reilly said it wouldn't leave when he attempted to shoo it away.

When the coyote bit the father's chest and forearm in response to being kicked, O'Reilly felt he had no choice but to fight to kill.

The dad, who feared his children's lives were in danger, described how he got on top of the animal and cut off its air supply.

'In the middle of the moment you're not really thinking,' O'Reilly told WMUR. 'It's really just instinct. The fact that when we tried to kick and push and get rid of him, it became clear that he was not disengaging.'

The child was not bitten.