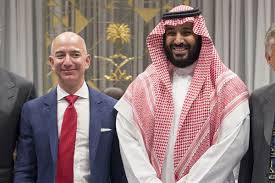 In November 2018, Mohammed bin Salman sent Bezos a message with a photo of a woman who resembled Lauren Sanchez

It also contained a joke about negotiating with women which was like 'reading the software license agreement' and 'in the end, you just agree'

At the time, Bezos and Sanchez's romance had not yet been made public

That WhatsApp 'hack' is now being investigated by UN special rapporteurs