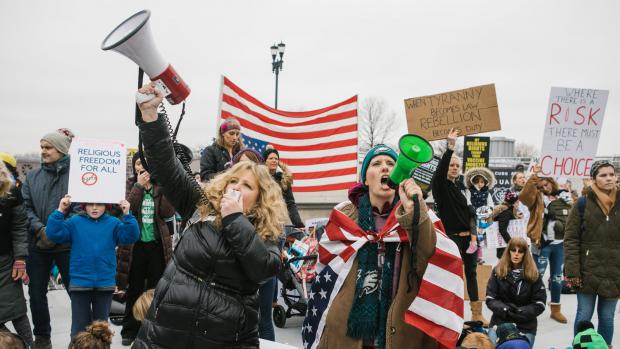 The battleground is now set. On one side are those who continue to claim "the science is settled" on vaccine safety and want to eliminate all vaccine exemptions, essentially forcing all children to get vaccines whether their parents agree or not. On the other side are those who believe that the science is far from settled, and believe that parents should have the right to choose what gets injected into their children's bodies without fear of punishment.

The latest skirmish of this battle was on Monday in Trenton, NJ, where a bill proposing one of the nation's broadest bans on religious exemptions to childhood vaccines did not have enough support in the Democrat-controlled State Senate to be put up for a vote. The bill would have ended a policy that allows parents in New Jersey to cite religious beliefs as the reason their children have not been immunized, without affecting the child's ability to be enrolled in school.

Weeks of sustained and boisterous protests outside the State Legislature by those opposed to forced vaccination are being touted as the main reason the bill did not go through. The intensity of the prolonged protest was unlike anything in Trenton in over a decade, many longtime lawmakers and lobbyists said.

The protesters took it to be a monumental victory for their cause, and some advocates are seeing this as a tipping point in the battle, going into 2020 with great optimism. Vaccine safety advocate Robert F. Kennedy Jr. got clamorous cheers as he spoke to the protesters about the legislators pushing this bill. According to him:

You guys are heroes! Because this state is known as the medicine cabinet state, this is the headquarters of all those [pharmaceutical] companies, they own these people in the state legislature. And guess what? You beat them here! You beat them in December, when they first came out, and now they're coming back and they're trying to do it again. And we're going to beat them this week too! (source)

Mainstream: "The Science Is Settled"

Mainstream media had a predictably different tone on the matter, In a New York Times article on the subject, the familiar vaccine safety mantras are cited in authoritative parlance from legislators:

"It's going to get done…They can bang on their drums and their sirens and their truck horns…This is a real public health emergency."–Senate president Stephen M. Sweeney

"The science is settled on this,"–Senator Loretta Weinberg, a sponsor of the legislation

"Vaccines are safe, and we in public health need to say that repeatedly."–Assemblyman Dr. Herb Conaway