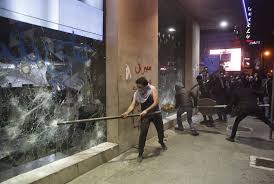 For starters, it will be at least an hour's wait in line before her turn comes. And if she's lucky, she'll be able to withdraw $300 — the weekly limit on dollar withdrawals imposed by banks to preserve liquidity — without having to bargain with the teller.

"I tell my family 'I'm going to the bank, but I don't know when I'll return,'" said the communications manager. "It's very unpleasant. You see people's expression — worried, confused, they're scared that they're going to lose their deposits."

For years, many Lebanese have lived beyond their means, supporting their out-sized spending with loans and generous remittances from diaspora relatives scattered across the globe, including family members working in oil-rich Arab Gulf countries.

A severe financial crisis and unprecedented capital controls have put an end to this, uniting both rich and poor in anger against corrupt politicians who have brought the country to the brink of economic collapse, and a banking system they accuse of holding their deposits hostage.