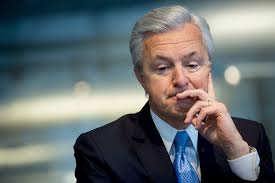 ...and settlements with eight former Wells Fargo senior executives on Thursday, including the payment of a $17.5 million fine by John Stumpf, the bank's former CEO, who also agreed to a lifetime industry ban. Carrie Tolstedt, who led Wells Fargo's community bank for a decade, faces a penalty of as much as $25 million.

"The actions announced by the OCC today reinforce the agency's expectations that management and employees of national banks and federal savings associations provide fair access to financial services, treat customers fairly, and comply with applicable laws and regulations," Joseph Otting, who heads the OCC, said in a statement.

Wells Fargo unleashed unprecedented public and political ire in 2016 after its was revealed that bank employees opened millions of fake accounts to meet sales goals. That and a slew of retail-banking issues that subsequently came to light have led to regulatory fallout that's in many cases unprecedented for a major bank, including a growth cap from the Federal Reserve. It also led to a historic Congressional grilling of the bank's then CEO, John Stumpf, who resigned shortly after.