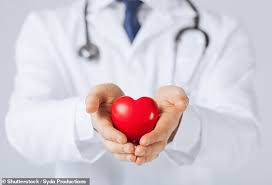 A robotic heart could see an end to the need for transplants within eight years, scientists believe.

Experts in the Netherlands, Cambridge and London are developing a 'soft robot' heart which could keep blood pumping around the body.

They aim to implant the first working prototype in animals within three years and in humans by 2028.

The device is one of four projects shortlisted for a major £30million prize to transform the treatment of heart disease.

The very best cardiovascular researchers from around the world - including experts from Oxford, Imperial College London, Harvard and Sheffield - are among the teams bidding to win the prize.

As well as the robotic heart, the shortlisted projects include a vaccine for heart disease, a genetic cure for heart defects, and the very best in next generation 'wearable' technology that could spot heart attacks and strokes before they happen.

The British Heart Foundation - which is running and funding the £30million 'Big Beat Challenge' - received 75 applications from teams in 40 countries.

The four finalists have received £50,000 in seed funding to develop their ideas in the next six months, before a final winner will be selected for the main prize this summer.