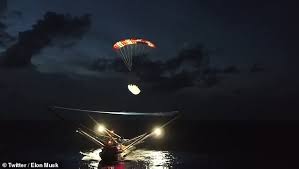 SpaceX will try to catch its astronaut-bearing 'Crew Dragon' capsules in giant nets as they return from orbit, Elon Musk has suggested.

The US aerospace firm is already using the same method to try to catch the protective nosecones of rockets which are jettisoned after launch.

According to Mr Musk, each nosecone costs around £4.6 million ($6 million) — and keeping them out of corrosive seawater is the first step to being able to reuse them.

Catching the crew capsules, similarly, could save money by allowing them to be more easily restored for multiple flights.

The nets are suspended above specially-equipped boats, of which there are presently two in operation — 'Ms Chief' and 'Ms Tree' (formerly 'Mr Steven').

Both vessels have managed to catch the falling rocket parts on a number of occasions — but the majority have landed in the ocean instead.

SpaceX will likely want to improve its success rate before it attempts to try the same manoeuvre to land a crewed spacecraft.

'I think it would be quite cool to use the boats that we are using to catch the fairing, once that is really well-established, to catch Dragon as it's coming in from orbit,' Mr Musk said during a press conference on January 19, reported Space.com.