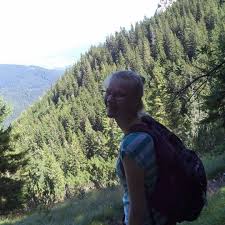 A German woman used Tinder in an ingenious way to get her and her friends out of a sticky situation in the Norwegian winter wilderness.

Professional kite surfer and self-described adventurer Lonia Haeger was travelling in a camper van with two friends in the remote Nordkapp area, on the northernmost tip of Norway, when ice made their journey treacherous and the road became completely impassable for them.

The trio were terrified their car could slide down the mountain or collide with another motorist, with emergency services unable to reach their remote location quickly enough.

One of the friends, Phil, came up with the idea of using dating app Tinder to help get them out of their situation.

Lonia said: 'While sitting in our camper with the fear that every second the car could slide down the mountain or a car could crash into our camper due to the slippery road, Phil had the weird but actually genius idea to create a Tinder account.'

Once she had set up the Tinder profile, she was contacted by a bearded local within minutes.

Dating in a politically polarized world

Twitter is left in stitches by college student who wrote an English essay about Tom & Jerry...