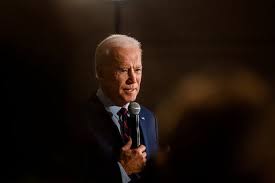 As the nation's first Democratic presidential caucuses are set to begin in Iowa next month, the race for the party's 2020 nomination will begin in earnest.

Aside from being a gaffe machine, Biden has had difficulty remembering things like details, facts, and where he is half the time.

But as the Hawkeye State caucuses approach, Democratic leaders are beginning to worry about Biden's past.

On Monday, the day that Sen. Cory Booker of New Jersey ended his pointless, aimless campaign, yet another video featuring Biden went viral online in which he came to the defense of then-President George W. Bush's decision in 2003 to invade Iraq.

In the video, Biden defended the decision and was effusive in his praise for Bush which came just a few months after the former president's now-infamous "Mission Accomplished" stunt featuring him landing on the deck of the aircraft carrier USS Abraham Lincoln.

In addition to the video, Zero Hedge notes, Biden has repeatedly lied about his 'leading' role in pushing for the war authorization in the Senate fully five months before the March 2003 invasion. He has sought to distance himself and conceal facts now that public opinion on the war has shifted.