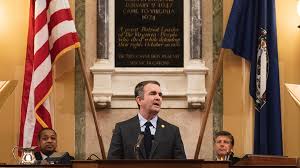 The state doesn't have much respect for the Second Amendment, and we're about to see if their attitude is the same towards the First. Bill HB 1627 is titled "Threats and harassment of certain officials and property; venue," and was introduced by Democrat Jeffrey M. Bourne on January 16th.

The bar for harassment is already as low as "vulgar language" in Virginia's code 18.2-152.7:1: If any person, with the intent to coerce, intimidate, or harass any person, shall use a computer or computer network to communicate obscene, vulgar, profane, lewd, lascivious, or indecent language, or make any suggestion or proposal of an obscene nature, or threaten any illegal or immoral act, he shall be guilty of a Class 1 misdemeanor.