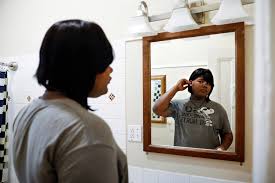 Funded with a $2.3 million allocation from the Mayor's Office of Housing and Community Development and the Office of Transgender Initiatives, the 'Trans Home' on Washington Street will provide a 'safe shelter and supportive services for 13 new residents, who will share a three-story building with 13 bedrooms, three kitchens and a common living space,' according to the report.

The apartments, which have mirror floor plans, feature wood floors throughout and original moldings and other decorative details. In the second-floor flat, the right side front room has a covered over tile fireplace and mantel, while the back room features a built-in wall cabinet with glass-paneled doors.

Residents will be allowed to live in the house rent-free for a year while receiving assistance with finding a longer-term place to live, according to the report.

"I think it is great. I love the location," said Trans Home's first resident, 60-year-old Jane Cordova, adding "I like to cook ... I am the mother of the house."

Come February Jane Cordova will move out of a shelter for LGBT adults in San Francisco's Mission district for her own room in a Chinatown apartment. The scalloped windows in her bedroom will look out onto the city's famed cable car line, which stops mere feet away.

Cordova, 60, a transgender woman, is the first resident selected for the Trans Home SF on Washington Street, the city's first transitional housing program for transgender and gender-nonconforming adults. The program aims to provide apartments for 12 individuals age 25 and older who will be able to live rent-free for a year as they receive support in landing a job, enrolling in school, and saving money to move into their own apartment. -Bay Area Reporter

After job is eliminated, police chief strips down to underwear and walks home in snowstorm