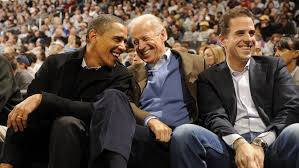 James Biden couldn't be outdone by his younger brother and drug addict nephew could he?

$1.5 Billion contracts are nothing to sneeze at, even for a Biden.

Here's the latest from Breitbart:

The dovetailing of James Biden's professional life with his brother's political influence is extensively detailed in Profiles in Corruption: Abuse of Power by America's Progressive Elite—a new book by Peter Schweizer, senior contributor at Breitbart News and president of the Government Accountability Institute (GAI).

In 2010, shortly after a disastrous attempt at running a hedge fund with his nephew Hunter, James Biden entered the construction and international development industry. Even though he lacked background in either, James secured a position as executive vice president at the newly formed HillStone International, LLC. The firm, which was a subsidiary of the long struggling Hill International, was unique for a multitude of reasons.

"The president of HillStone International was Kevin Justice, who grew up in Delaware and was a longtime Biden family friend," Schweizer writes in his book. "He was friends with lots of Bidens, especially Joe's sons Hunter and Beau."

Under Justice's leadership, the company was setting out to pursue technology and construction projects in the Middle East. Of particular interest to the company were the millions being given to government contractors for the rebuilding of war-torn Iraq—an endeavor Joe Biden was tasked to oversee by President Barack Obama.