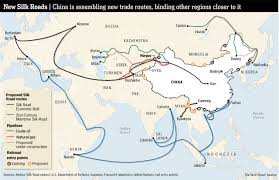 Asia and Europe have been trading goods and ideas since at least 3,500 BC. Historically, the flux may have suffered some occasional bumps – for instance, with the irruption of 5th-century nomad horsemen in the Eurasian plains. But it was essentially steady up to the end of the 15th century. We can essentially describe it as a millennium-old axis – from Greece to Persia, from the Roman empire to China.

A land route with myriad ramifications, through Central Asia, Afghanistan, Iran and Turkey, linking India and China to the Eastern Mediterranean and the Black Sea, ended up coalescing into what we came to know as the Ancient Silk Roads.

By the 7th century, land routes and sea trade routes were in direct competition. And the Iranian plateau always played a key role in this process.

The Iranian plateau historically includes Afghanistan and parts of Central Asia linking it to Xinjiang to the east, and to the west all the way to Anatolia. The Persian empire was all about land trade – the key node between India and China and the Eastern Mediterranean.

The Persians engaged the Phoenicians in the Syrian coastline as their partners to manage sea trade in the Mediterranean. Enterprising people in Tyre established Carthage as a node between the Eastern and Western Mediterranean. Because of the partnership with the Phoenicians, the Persians would inevitably be antagonized by the Greeks – a sea trading power.