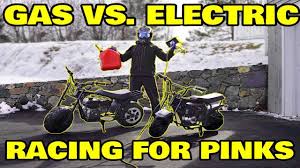 After Rich Benoit showed up riding a mini electric bike at Argo Cycles after confessing his Tesla Model X broke him, a friend of his wanted to get him even more broke. He bet 1,000 bucks that his mini superbike would beat Benoit's. Probably foreseeing an opportunity to get some of the money he spent on the Model X back, he accepted it. The video above shows precisely this story.

The video will tell you whether Benoit wins or doesn't. Knowing the result through us would make you lose a lot of the fun. Not only when the races between the mini bikes start – yes, there is more than one round – but also what Benoit did to get ready for action.

As it was, the mini electric bike would be an easy target for Benoit's friend. That was why the video presenter decided to give it upgrades. In fact, and as his YouTube channel preaches, rebuild the whole thing apart from the tires, seat, and frame.

Canada: Foul Play Suspected as Third Train Derails in a Month After Far-Left Call for Sabotage

Tesla Gets Approval To Continue Cutting Down Thousands Of Trees...