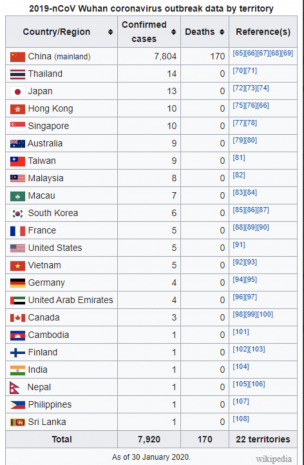 China reported largest one-day jump in fatalities on Wednesday with

Thailand leads with most cases outside China (14)

Update (1015ET): Bloomberg reported that the number of total cases in China has climbed past 8,000, the number of cases from the SARS outbreak (which lasted for months). However, that figure hasn't been confirmed anywhere else.

Instead, SCMP says the number of confirmed cases hasn't budged since early Thursday morning. Meanwhile, Australia reported its eighth coronavirus case on Thursday, a 42-year-old Chinese national from Wuhan tested positive for the virus and was isolated in Gold Coast University Hospital. The Australian government is also in talks with Beijing to evacuate its citizens.

As we mentioned earlier, Tang Zhihong, the head of the health commission of the central Chinese city of Huanggang, was sacked on Thursday night, according to the city's Communist Party committee. This has morphed into a local scandal, as the scapegoating of local officials continues.