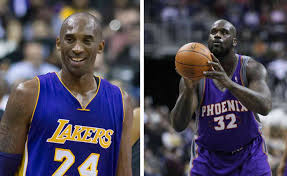 Not only that, Shaq will be donating all the proceeds generated from the event between the Kobe & Vanessa Bryant Family Foundation and the families of the helicopter crash victims.

Shaq's Fun House Event will be taking place this weekend at the Mana Wynwood Convention Center in Miami. The party, which is set to feature such musical performers as Pitbull and Diddy, will host a variety of games, carnival rides, and circus performances in addition to streaming the Super Bowl LIV game between the San Francisco 49ers and the Kansas City Chiefs on Sunday.

Shaq says that he had been contemplating canceling the event after he was left reeling from the death of Bryant, who played alongside him on the Los Angeles Lakers for three of Shaq's NBA titles.

"Been going back and forth the past couple of days on if I should even have my event in Miami this weekend," Shaq wrote on Instagram this week. "Part of me wanted to stay to myself as I reflect what my brother and his family mean to me and my family. But in thinking what would Kobe want, what would he do? Kobe would want us to push through and celebrate life. So let's do just that.

"I'll be dedicating and donating all my proceeds from Friday nights Fun House to all the families who lost loved ones and to the Kobe and Vanessa Bryant Foundation," he concluded. "Together we will celebrate all those who lost their lives in Sunday tragedy. RIP my brother, my friend and my homie, The Black Mamba. Until we meet again."

As ticket prices for this weekend's Lakers' game against the Portland Trailblazers skyrocket up to $950, StubHub also announced that they would be donating all of their ticket sales generated from the game to Bryant's charity—and they will be doing the same for the postponed Lakers-Clippers game as well.

"In honor of Kobe and Gigi Bryant, all fees for the Jan. 31 Lakers vs Portland Trailblazers game and the Lakers vs Clippers game—for whenever it is rescheduled—will be donated to the Kobe & Vanessa Bryant Family Foundation," the company told USA Today Sports in a statement.