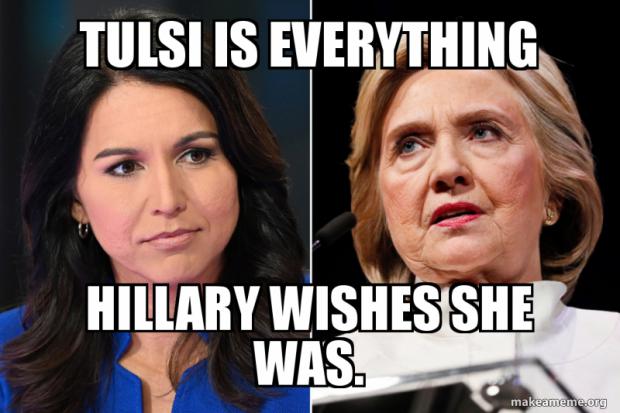 Hillary Clinton is refusing to accept legal papers from Tulsi Gabbard's $50 million lawsuit against her according to the Hawaii congresswoman's attorneys.

Gabbard, who is running for president, filed a $50 million lawsuit against Clinton last week after the former Secretary of State implied the congresswoman was a "Russian asset."

Brian Dunne, an attorney representing Gabbard, told the New York Post that Secret Service agents turned away a process server Tuesday when the server tried to deliver the lawsuit to Clinton's home in Chappaqua, N.Y., north of New York City.

Dunne said the server was instructed instead to deliver the papers to the Washington office of Clinton's lawyer, David Kendall, but Kendall's firm, Williams & Connolly, also declined to accept the legal papers, according to the Post.

"I find it rather unbelievable that Hillary Clinton is so intimidated by Tulsi Gabbard that she won't accept service of process," Dunne told the newspaper. "But I guess here we are."

Clinton made the comments last fall after appearing on a podcast where she claimed that President Trump and the Republicans were "grooming" a third-party candidate.

"I'm not making any predictions, but I think they've got their eye on somebody who's currently in the Democratic primary and they're grooming her to be the third-party candidate," Clinton said in the podcast.

She continued, not naming the candidate, "She's the favorite of the Russians. They have a bunch of sites and bots and other ways of supporting her so far and that's assuming Jill Stein will give it up because she's also a Russian asset."

While Clinton did not mention Gabbard by name, it is believed that she is referencing the Hawaii congresswoman.

Last week, Gabbard told Fox and Friends that Clinton was trying to "intimidate" and "smear" her in order to silence the lawmaker.

"I have dedicated my entire adult life to serving our country and for Hillary Clinton and her powerful allies to attempt to smear me and accuse me — really implying that I'm a traitor to the country that I love — is something that I cannot allow to go unchecked," she said.

You are seeing one of the basic ways that anyone can use to fight any kind of paperwork against them, from government or other. It's called ACCEPTANCE. If you don't accept the paperwork, you are not a party to the case. You have 3 days to return the paperwork, but do it fast. --- To strengthen your position, you might file with the court, a doc that expresses your desire to get injunctive relief from being charged as the person on the original paperwork, so that you are not attacked by law enforcement for mistaken identity, since you formally didn't accept the position of the party named on the original paperwork (possibly a subpoena, or an indictment). Your strength in your doc for relief is your claim of being a man/woman, whereas the original doc did not claim this. "i, YOUR NAME (even if it looks exactly like the name on the doc), man/woman, have not accepted..., and wish relief from harassment of the person named on the doc..."