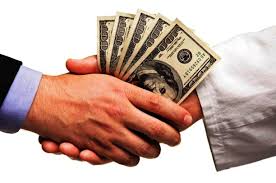 Financial Kickbacks are Illegal in the Medical Field

When I worked in the hospital as a radiologist doing medical imaging, part of my job was to recommend additional imaging studies.   For example, if I saw a mass on a chest Xray, I would recommend a chest CAT scan.  If I saw blastic lesions in the rib on a chest Xray, I would recommend a radionuclide bone scan, etc.  I always thought to myself, what if i owned a radiology imaging center.  That would be great because I could really make a lot of money by referring all of these cases to myself. Above image courtesy of Bob the Pharmacist.

However, there is a problem.  Referring cases to my own imaging center is illegal, a form of fraud and abuse, a violation of the 1988 Stark Law "Ethics in Patient Referrals Act".(4,5)  These laws are summarized by the Office of Inspector General Report Department of Health and Human resources:(4)

"The five most important Federal fraud and abuse laws that apply to physicians are the False Claims Act (FCA), the Anti-Kickback Statute (AKS), the Physician Self-Referral Law (Stark law), the Exclusion Authorities, and the Civil Monetary Penalties Law (CMPL). Government agencies, including the Department of Justice, the Department of Health & Human Services Office of Inspector General (OIG), and the Centers for Medicare & Medicaid Services (CMS), are charged with enforcing these laws. As you begin your career, it is crucial to understand these laws not only because following them is the right thing to do, but also because violating them could result in criminal penalties, civil fines, exclusion from the Federal health care programs, or loss of your medical license from your State medical board."(4)

Practice of Medicine is Not a Multi-Level Marketing Scheme

In other words, the practice  of medicine is not a Multi-Level Marketing Scheme to make money by "gaming the system" by running large numbers of patients through tests or procedures for financial profit.  Not only does this waste a huge amount of public money, it may cause considerable harm to the patient population.  This is considered unethical behavior by the doctor, who is then subject to various civil and  criminal penalties including loss of license.

Pediatricians Allowed to "Game the System"

This brings us to the financial incentives to pediatricians offered by insurance companies for vaccinating our children. The Blue Cross Blue Shield health insurance document explaining these financial  incentives can be found Here and Here. Pediatricians are raking in 40-80 thousand dollars a year from these kickback schemes.

Why Does the Health Insurance Company Offer Kickbacks for Vaccinations?

Are vaccinated populations healthier and utilize less health care resources, thereby leading to greater profits for the health insurance industry?  The answer is yes, according to this article in 2014 Pediatrics from authors employed by the CDC and the Bill and Melinda Gates Foundation.  They concluded the cost savings are enormous.  Health insurance company decisions to offer financial incentives to pediatricians for vaccinating children is based on this and similar studies.(11)

Analyses showed that routine childhood immunization among members of the 2009 US birth cohort will prevent 42,000 early deaths and 20 million cases of disease, with net savings of $13.5 billion in direct costs and $68.8 billion in total societal costs, respectively. The direct and societal benefit-cost ratios for routine childhood vaccination with these 9 vaccines were 3.0 and 10.1.(11)

Of course, the article is severely flawed because it is based on historical data and various assumptions and calculations which may turn out to be false.   The only way to really know if a highly vaccinated population is healthier than an unvaccinated, and utilizes less health care, is to do a randomized prospective study.  Such a study would follow a population of children over 5-10 years with the population randomized to vaccinated or unvaccinated.  At the end of the observation period,  the numbers can be tabulated for ER (emergency room) visits and hospitalizations, autoimmune disease, and neuro-developmental disorder in the vaccinated vs. unvaccinated groups, and get a real answer to the question.  Of course, this study has never been done, and probably never will.

Are Vaccinated Healthier than Unvaccinated?

Quite opposite to what the health insurance industry believes, we have studies showing that vaccinated populations are NOT healthier than unvaccinated populations.  A study by Neil Z. Miller in the 2016 Journal of Am Phys Surg 2016, reveals the children receiving greater numbers of vaccinations have more ER visits, more hospitalizations and increased mortality reported to the VAERS Database (VAERS= Vaccine Adverse Event Reporting System).(7)    Neil Miller says that less healthcare is better than more healthcare. He examined the:

"VAERS database from 1990 through 2010. There were more than 325,000 VAERS reports. Our study showed that infants who receive several vaccines concurrently, as recommended by CDC, are significantly more likely to be hospitalized or die when compared with infants who receive fewer vaccines simultaneously".(7)

The CDC says that receiving multiple vaccines concurrently is safe for children:(8)

"Scientific data show that getting several vaccines at the same time does not cause any chronic health problems. A number of studies have been done to look at the effects of giving various combinations of vaccines, and when every new vaccine is licensed, it has been tested along with the vaccines already recommended for a particular aged child. The recommended vaccines have been shown to be as effective in combination as they are individually. Sometimes, certain combinations of vaccines given together can cause fever, and occasionally febrile seizures; these are temporary and do not cause any lasting damage. Based on this information, both the Advisory Committee on Immunization Practices and the American Academy of Pediatrics recommend getting all routine childhood vaccines on time."