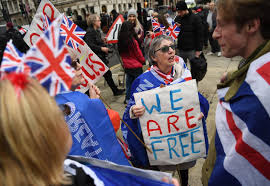 The U.K.'s departure became official at 11 p.m. (2300GMT), midnight in Brussels, where the EU is headquartered. Thousands of enthusiastic Brexit supporters gathered outside Britain's Parliament to welcome the moment they'd longed for since Britain's 52%-48% vote in June 2016 to walk away from the club it had joined in 1973. The flag-waving crowd erupted in cheers as Big Ben bonged 11 times — on a recording. Parliament's real bell has been silenced for repairs.

In a message from nearby 10 Downing St., Prime Minister Boris Johnson called Britain's departure "a moment of real national renewal and change."

But many Britons mourned the loss of their EU identity, and some marked the passing with tearful vigils. There was also sadness in Brussels as British flags were quietly removed from the bloc's many buildings.

Whether Brexit makes Britain a proud nation that has reclaimed its sovereignty, or a diminished presence in Europe and the world, will be debated for years to come.

While Britain's exit is a historic moment, it only marks the end of the first stage of the Brexit saga. When Britons wake up on Saturday, they will notice very little change.