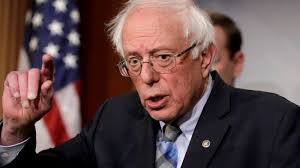 While Sanders has honeymooned in the Soviet Union, praised communist Cuba, and called for taking over  "the major means of production" in the past, he's tried to re-brand his socialism as social democracy in recent years.  "When I talk about democratic socialism, I'm not looking at Venezuela. I'm not looking at Cuba. I'm looking at countries like Denmark and Sweden" he says. (I'm a democratic capitalist, by the way).

While he's only publicly called for the nationalization of healthcare on the campaign trail until now, he's just done the same for electricity.

As Politico reported: Sanders has laid out a $16 trillion climate change plan that would transition U.S. electricity generation away from fossil fuels to renewable resources like wind, solar and hydropower by 2030.

A Sanders administration would pour funding into the four existing "power marketing administrations" that are overseen by the Energy Department, as well as the Tennessee Valley Authority and one newly created entity, to vastly expand their solar, wind and geothermal power production. Those organizations currently provide power from hydroelectric dams to 33 states, and would be able to sell the increased green energy to local utilities nationwide — creating a sort of "public option" that would compete with the coal, natural gas and nuclear plants owned by privately owned power generators.