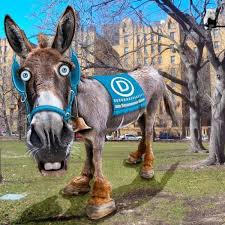 Following one of the most childish tantrums of denial ever recorded, Democrats set about destroying the Trump presidency in its crib; a WaPo headline from January 20, 2017 – Inauguration Day itself – exclaimed "The Campaign to Impeach President Trump has Begun." The opening gambit was going to be Emoluments, including rent paid by the Industrial & Commercial Bank of China for its space in Trump Tower in New York.

After three years, it looks like that attempt finally reached its end game, failure, one gray afternoon. On Friday the Senate brought impeachment proceedings to their effective conclusion, declaring the witnesses already called before the House were to be the last. The formal vote to acquit Trump is scheduled as an anti-climax for Wednesday.

It has been ugly and mean. Using the entire apparatus of the American intelligence community, operating fully outside the law, Democrats declared the President of the United States a Russian spy. They forced gentlemen to explain to their elderly mothers what a pee tape was. We had to hear over dinner about Trump's sexual peccadilloes and look deeper into Stormy Daniel's cleavage than our own political souls. They made expedient heroes out of small, dishonest men like Michael Avenatti, John Brennan, and James Comey for perceived political gain.

Shame on you, Democrats.