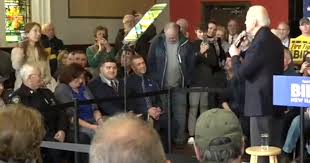 Presidential candidate Joe Biden was heckled by climate protesters during a campaign event in New Hampshire despite promising them he would "get rid of fossil fuels."

Biden was talking about Medicare for All but the subject was swiftly changed by the protesters, who began yelling about eliminating fossil fuels.

After falsely suggesting that the protesters were in fact Trump supporters, Biden subsequently responded, "We are going to get rid of fossil fuels."

Biden repeatedly tried to return to his talking point, but the hecklers wouldn't stop.