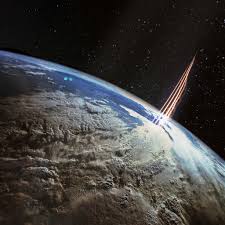 Neighbors, the notice said, could object to the construction. No one did, and the shed went up.

Stanek, an astronomer at Ohio State University, told me this story not because he thinks other people will care about the specific construction codes of Columbus, Ohio, but rather because it reminds him of the network of satellites SpaceX is building in the space around Earth.

"Somebody puts up a shed that might obstruct my view by a foot, I can protest," Stanek said. "But somebody can launch thousands of satellites in the sky and there's nothing I can do? As a citizen of Earth, I was like, Wait a minute."

Since last spring, SpaceX has launched into orbit dozens of small satellites—the beginnings of Starlink, a floating scaffold that the company's founder, Elon Musk, hopes will someday provide high-speed internet to every part of the world.

SpaceX sent a letter too, in a way. After filing for permission to build its constellation in space, federal regulators held the required comment period, open to the public, before the first satellites could launch.