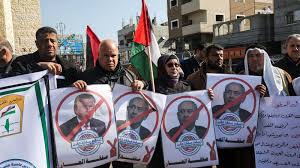 Palestinians held demonstrations across the occupied territories on Friday, three days after US President Donald Trump unveiled his proposal to end the Israeli-Palestinian conflict.

In the West Bank, including East Jerusalem, and the besieged Gaza Strip, thousands denounced the plan unveiled by the Trump administration for pushing forward a vision largely in sync with far-right Israeli demands.

Meanwhile in neighbouring Jordan, some 3,000 people took to the streets of the capital Amman to denounce the US proposal.

Trump's long-awaited 181-page document was released on Tuesday and contained conceptual maps showing how Israel and a future Palestinian state would appear.

The document allows for Israel to cement its full control over Jerusalem and its holy sites, formalise the annexation of much of the West Bank, maintain military control over a fragmented Palestinian state and deny the right of return to refugees who were forced to flee their homes in what became the state of Israel in 1948.

Day of Shame: US House Approves $2 Trillion Everything Bailout on a Voice Vote

Original artwork of the first ever Flash Gordon comic has sold for a world record $480,000...