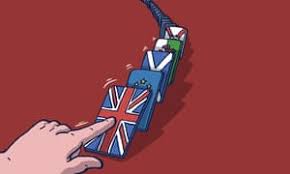 The new Johnson government is confident that Britain will do well outside the EU. Free trade will be embraced, and a no-deal outcome, now dubbed an Australian trade relationship, holds no fears for the British government.

This article summarises the political and economic consequences of this historic moment. The fly in the ointment is there is no sign that Britain's government understands the importance of sound money, which will be crucial in the event a global economic and financial credit crisis materialises.

Having given independence to all its colonies, now it's Britain's turn. On 1 February the UK became politically independent and entered an eleven-month transition period while trade terms with the EU and other trading nations are negotiated, with the objective of entering 2021 with freedom to trade without tariffs with as many nations as possible. If Britain succeeds in its initial objectives these trade agreements will include not only the EU but also America, Japan, South Korea, Canada, Australia, New Zealand, the other trans-Pacific Partnership nations and a host of sub-Saharan African nations in the Commonwealth. It amounts to about two-thirds of the world measured by nominal GDP, of which only 21% is with the EU.