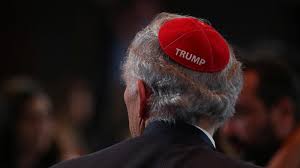 But if rightwing supporters love Trump's plan to give Israel sovereignty over much of the West Bank, including Jerusalem, liberal and centrist American Zionists are horrified. They regard the plan as an existential threat to "the Jewish democracy." These Israel supporters say the plan will move Israel toward annexing much of the West Bank, thereby ending any possibility of a two-state solution and leading to a binational state in which Palestinians will demand equal rights.

These Zionists are responding with alarm and rage to the plan and, joined by many leading Democrats, announcing plans to fight its implementation.

So, here is what it seems like to me: Israel today gets to annex the Jordan Valley and effectively annex most of Area C by "applying sovereignty" to settlements. In four years, if the Palestinians don't accept this, Israel gets to annex the entirely of the West Bank.

It is the clearest roadmap one could construct to a one-state outcome. Congratulations to the extreme right – you are about to get what you wished for.