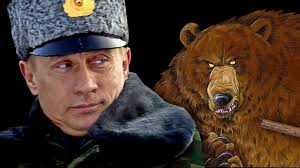 To hate Russia has become dogma on both sides of the political aisle, in part because no politician has really wanted to confront the lesson of the 2016 election, which was that most Americans think that the federal government is basically incompetent and staffed by career politicians like Nancy Pelosi and Mitch McConnell who should return back home and get real jobs. Worse still, it is useless, and much like the one trick pony the only thing it can do is steal money from the taxpayers and waste it on various types of self-gratification that only politicians can appreciate.

That means that the United States is engaged is fighting multiple wars against make-believe enemies while the country's infrastructure rots and a host of officially certified grievance groups control the public space. It sure doesn't look like Kansas anymore.

The fact that opinion polls in Europe suggest that many Europeans would rather have Vladimir Putin than their own hopelessly corrupt leaders is suggestive. One can buy a whole range of favorable t-shirts featuring Vladimir Putin on Ebay, also suggesting that most Americans find the official Russophobia narrative both mysterious and faintly amusing. They may not really be into the expressed desire of the huddled masses in D.C. to go to war to bring true U.S. style democracy to the un-enlightened.

One also must wonder if the Democrats are reading the tea leaves correctly. If they think that a slogan like "Honest Joe Biden will keep us safe from Moscow" will be a winner in 2020 they might again be missing the bigger picture.