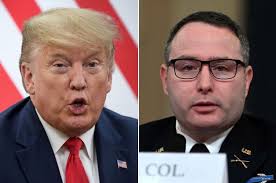 'Fake News @CNN & MSDNC keep talking about "Lt. Col." Vindman as though I should think only how wonderful he was,' Trump wrote in a tweet on Saturday morning, purposely conflating MSNBC with the Democratic National Committee.

'Actually, I don't know him, never spoke to him, or met him (I don't believe!) but, he was very insubordinate, reported contents of my "perfect" calls incorrectly, & was given a horrendous report by his superior, the man he reported to, who publicly stated that Vindman had problems with judgement, adhering to the chain of command and leaking information,' he continued.

'In other words, "OUT",' Trump concluded. He is spending the weekend at the White House after dramatically firing Vindman and EU Ambassador Gordon Sondland on Friday.

Vindman's attorney fired back in a statement, saying: 'The president this morning made a series of obviously false statements concerning Lieutenant Colonel Vindman; the conflict with the clear personnel record and the entirety of the impeachment record of which the President is well aware.'