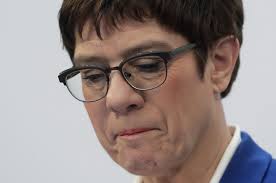 She will step down as the leader of Angela Merkel's Christian Democratic Union, the center-right party that has ruled Germany for two decades, and won't run as the party's candidate to succeed Merkel during the federal election to pick Germany's next chief executive in 2021.

AKK reportedly resigned in protest over flirtations by the party's conservative wing to ally with Alternative für Deutschland, or the AfD, to achieve common political aims.

The centrists in the CDU, including Merkel herself, have denounced the AfD as a far-right borderline hate group populated by Nazi sympathizers. Meanwhile, AfD's leaders have taken steps to expel Nazi sympathizers and others who might alienate the general German public.

This political fracture was recently exacerbated by CDU members in East Germany, the formerly Communist region where the AfD's popularity is at its highest, who recently allied with AfD members to oust the left-wing premier of Thuringia. Merkel criticized the decision, which provoked general outrage throughout Germany.