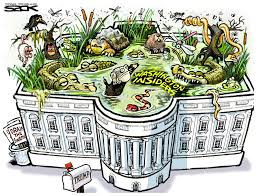 Although there are those who've been watching the dots of The Matrix assemble into the big picture for decades now, the election of Donald Trump has increasingly exposed what was hidden in plain sight for so long.

The awakening for many Americans could be compared to that of actor Jim Carrey's character in the 1998 film "The Truman Show".  In that narrative, the unsuspecting star of a global reality television program came to the realization his entire worldview was formed within a bubble; a literal bubble that generated bubblevision in Carrey's character as all of those around (and above) him performed right on cue.

Truly, it feels like that now in America. The times have become surreal.

And there is a great percentage of Americans who still live within the bubble. They are everywhere: In the workplace, in schools and colleges and at restaurants and in bars. They vigorously debate each other on who would make a better president between Bernie Sanders, Elizabeth Warren, Andrew Yang, or Joe Biden. They LOVE the fact that Trump was impeached and consider Adam Schiff, Nancy Pelosi, and the Devil's butler (Chuck Schumer) to be American heroes.