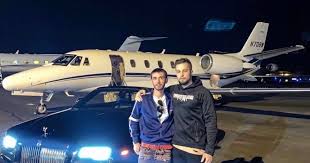 Two Arizona men have been accused of running a massive Ponzi scheme, according to documents filed in federal court.

Two Arizona men have been accused of running a massive Ponzi scheme, according to documents filed in federal court.

Their victims include a number of former Major League Baseball players.

From a look at their social media, John Caruso and Zach Salter had it all: traveling to exotic locations, driving luxury cars, and posing in private jets.

The two in their 20s were living the life of premier money managers in the trendy world of cryptocurrency, after founding a company called Zima Digital Assets.

But behind it all was a world of lies.

According to federal court documents, Caruso and Salter bilked investors out of more than $7.5 million.

Both are said to have sold their victims on a life of wealth and financial independence by trading in cryptocurrency.

Only one problem -- court documents say of the millions they took from victims, not one dollar ended up being invested. Instead, the two men are accused of living the high life with it.

Both spent at least $350,000 jetting around on private planes and hundreds of thousands on luxury cars, vacations, clothes and jewelry. The two even lived in multi-million-dollar mansions in Paradise Valley and Scottsdale.

They're really doing it...