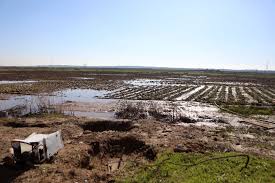 For five months, Palestinian farmers like Naim al-Khaissi had cultivated and irrigated their lands in the besieged Gaza Strip, waiting for the end of January to harvest vegetables from eastern farmlands located close to the separation barrier with Israel.

But after all of their hard work, Palestinian farmers woke up to the news that Israeli authorities had emptied out the nearby rainwater storage, effectively flooding Gaza crops only a few days before harvest season.

According to the Palestinian Ministry of Agriculture, Israel's opening of the dam's gates caused more than $500,000 worth of damage to more than 332 hectares of land in January alone.

The agricultural lands in the Israel-imposed "buffer zone" near the separation barrier constitute a source of livelihood for hundreds of Palestinian families and serve as Gaza's main source of fruits and vegetables.

The flooding comes amid other measures Palestinians say are being deliberately applied by Israeli forces to affect the impoverished besieged territory's food supply and push farmers off their lands.