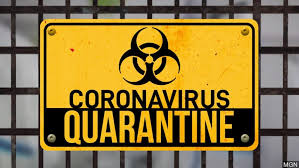 When I first learned about this, I was greatly alarmed, because we have all seen what is going on in China right now.  People are literally being physically dragged out of their homes and are being forcibly relocated to "mass quarantine camps" with hordes of other very sick people.  Sadly, many of them will never come out of those camps alive.  If this virus starts spreading like wildfire here in the United States, is it possible that something similar could start happening here?

The vast majority of the confirmed cases are still in China, but over the last couple of weeks the number of cases in the rest of the world has escalated dramatically.

Back on January 20th there were only 4 confirmed cases outside of China and now there are 464.  At this point there are victims in at least 28 different countries, and that number is almost certain to keep growing.

The reason why the virus has already spread to so many nations is because it is highly contagious.  Scientists have discovered that it can be transmitted from person to person very easily, it has an incubation period of up to 24 days, and it can survive on smooth surfaces for up to 9 days.

How the killer coronavirus compares to SARS, swine flu and Ebola:

The Number Of Coronavirus Cases Has Just Exploded, And Many Fear That The Worst Is Yet To Come

The Number Of Coronavirus Cases Has Just Exploded,

The Bio-Weapon Theory of the China Epidemic