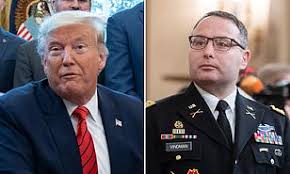 President Donald Trump said Tuesday the military should consider disciplining former White House National Security Council aide Alexander Vindman, whose testimony was critical in impeachment inquiry and who got escorted out of the White House Friday.

Vindman, an Army lieutenant colonel who provided some of the most damaging testimony during the House impeachment probe, was ousted from his White House job last week.

Trump said the military can now deal with Vindman, who served on detail to the national security counsel, 'any way they want.'

'I obviously wasn't happy with the job he did,' Trump said when asked about Vindman at a bill signing Tuesday.

'He reported a false call. What was said on the call was totally appropriate,' Trump said of his infamous call with the president of Ukraine that sparked a whistle-blower complaint.